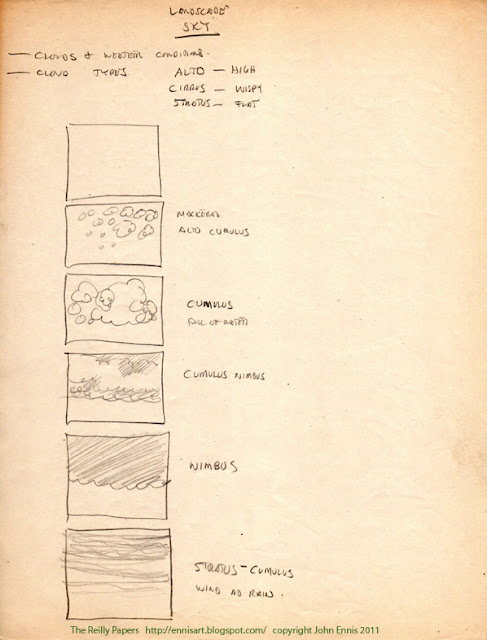 When my League instructor Robert Schulz offered this lecture to the class, I remember being struck by the amount of information the students were being given. Reilly's program  went way beyond teaching us how to paint, it helped us understand what we were painting. In retrospect it seems obvious that we should pay some attention to the different types of clouds in our landscape, but until then I hadn't given it much thought.

Cirrus are seen early morning or evening. They come together to form cumulus clouds in the afternoon. Stratus clouds are high in the sky and flatter. Cumulus are heaped up, but keep them light and floating. Cumulonimbus and nimbus are thunderclouds with precipitation. 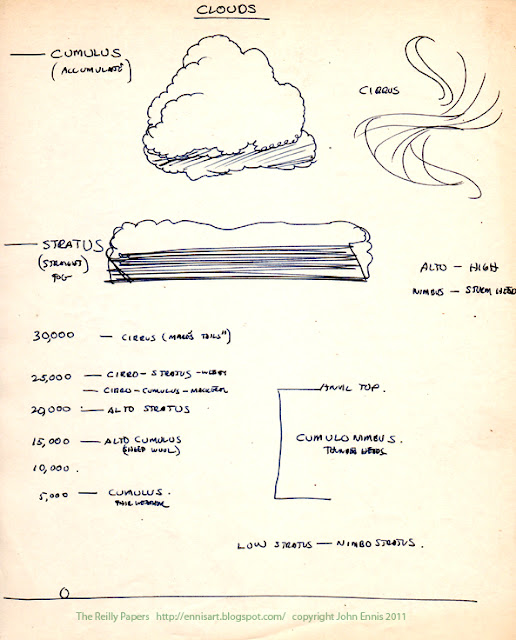 All clouds have action. They are a mass of floating water vapor moved by the wind. Soften edges, pull wisps out of the cloud to show its loftiness and the action the wind puts upon it. Often the shadow side of a cloud is the same value as the sky behind it, a warm neutral against a blue sky. 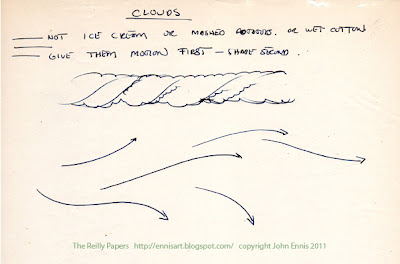 Your composition will determine which values of the sky vault will appear in your picture. Thalo blue and green are mentioned here, but ultramarine blue and viridian are mentioned elsewhere and work just as well. 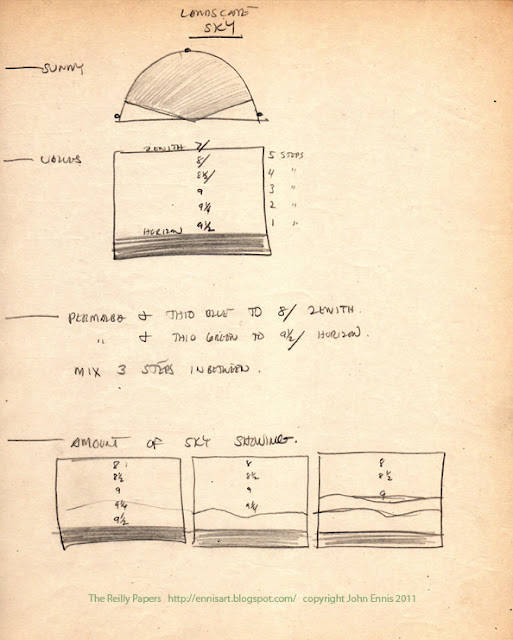 The Rose Dore Effect.
At the end of the day, dust and pollution rise up into the lower sky and become a red-orange haze of transmitted light. Reilly called this the Rose Dore' Effect after the pigment used to get the effect.  The sky vault was painted first, and let to dry. The clouds were painted wet on dry, and the rose dore was glazed over the horizon part way up the lower portion of the sunset sky, without changing the value. 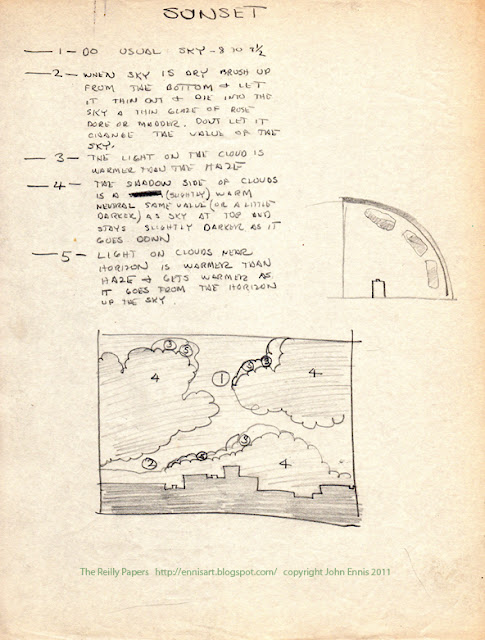 I've been a follower of this site for at least a year and only really started reading it today! What a WEALTH of information...Thanks so much for sharing it...

wow, very interesting. Thank you for posting this :)

Thank you so much. Really great information.

Is this blog still active?

We need more! Thanks for doing this!

I am just discovering this blog. It's amazing. Really looking forward to the next post about trees. Really appreciate your generosity. Kudos.

Please, give us the trees' entry!

Thank you for sharing these notions.

please go on posting more! this is invaluable!!!

many thanks for your efforts

I think that it is a great idea to learn more about what you are painting. It probably gives you a better appreciation when you are painting it. I love all your notes from the class. Thank you for sharing this with us.

please post more! this is unique stuff! I check this blog every week!

this is good post.
and you can go here

I am referring to this blog on a daily basis as I am trying to understand the science of colour and the landscape. It is the best information that I have found and boy have I been looking! Thankyou for being so generous.

For 28 years Frank Reilly was a prominent teacher at the Art Students League of New York. Succeeding George Bridgeman, he taught drawing and painting at the League until the early sixties. His classes were in such high demand the waiting list numbered in the hundreds, and at one point Reilly's classes accounted for half the League's tuition income. He eventually established the Frank J. Reilly School of Art not far from the League. Mr. Reilly developed a complete curriculum for teaching representational art. He left behind over a thousand pages of hand-written lecture notes. A selection of these documents are featured in this blog.

His program produced some of the most successful representational painters and illustrators of the era including Clark Hulings, James Bama, Michael Aviano, George Passantino, Robert Emil Schulz, Jerry Allison, Carl Hantman, Roger Kastel, and many more too numerous to mention. read more

All text, scanned documents, and images displayed on this site are copyright protected and not in the public domain. They are displayed here for the purpose of education. All rights are reserved. Reposting, reproduction, redistributing, or commercial use in any form is prohibited.